I write to you from my desk on the second floor of the ‘new’ boathouse, its crisp architectural lines standing tall and proud across from the quickly growing Lafayette skyline, along the winding banks of the muddy Wabash River that we all know and love. While the Purdue boathouse may have changed once or twice in the years since many of us rowed, and Purdue students’ clothes, music, and many of the buildings on campus may have changed along with it, know that the river, the workouts, the sweat, the grit and the gristle that is the soul of Purdue Crew have not changed. Not one bit. They’re the same as they’ve ever been for the past 73 years. Each afternoon eager Purdue students still enthusiastically get hands on their shells and walk down the hill in unison with their boat mates to place shells and oars in water at their coxswain’s call, and then launch themselves into the turbulent current, eager to bend and ply their black and gold oars through the waiting Wabash. Each rower and coxswain striving with every fiber of their collective energies to gain an inch, a seat, a deck, a length over their teammates’ shells. 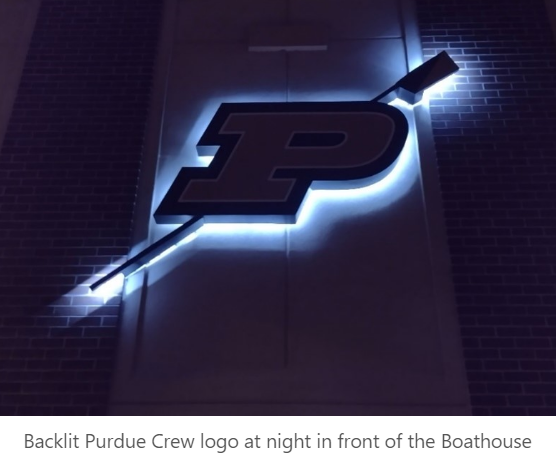 And when they’re exhausted and done with the piece, hunched over their oars and gasping for breath, they line the shells up and try it all over again, trying for another inch, another seat, another deck, each athlete competing not so much against each other, or even against visions of shells from Marietta or Michigan or Grand Valley, so much as against themselves. Because that’s what Purdue Crew is really about. It’s about committing to the fiery crucible of competitive rowing to then later emerge as if from a chrysalis on the other side of the experience, reborn, a more mature and self-actualized person better prepared to face the rigors and challenges of life after college.

With Purdue Crew celebrating its 73rd year and having its first head coaching change in 26 years, it’s a good time to reflect back on all that the team has accomplished since its inception, and envision what future we might usher in for Purdue Crew in the next 73 as we recommit to pulling for each other and pulling with each other just as we all did on the team a long (or not so long) time ago. If you haven’t been to the boathouse in the last few months, looking back on Purdue Crew’s history has never been easier and more self-evident. Through the tireless work of Head Coach Emeritus Dave Kucik and the Purdue Rowing Association, Bill Butler’s Dream Wall and its history of Purdue Crew was installed in the boathouse this past summer, which showcases many of the great patrons, victories, and accomplishments the team has enjoyed throughout its illustrious history. There are pictures of Purdue’s three different boathouses. Highlights of the addition of women’s rowing which made the team whole. Showcases centered on the many Dad Vail boat and team trophies Purdue Crew has won through the years. 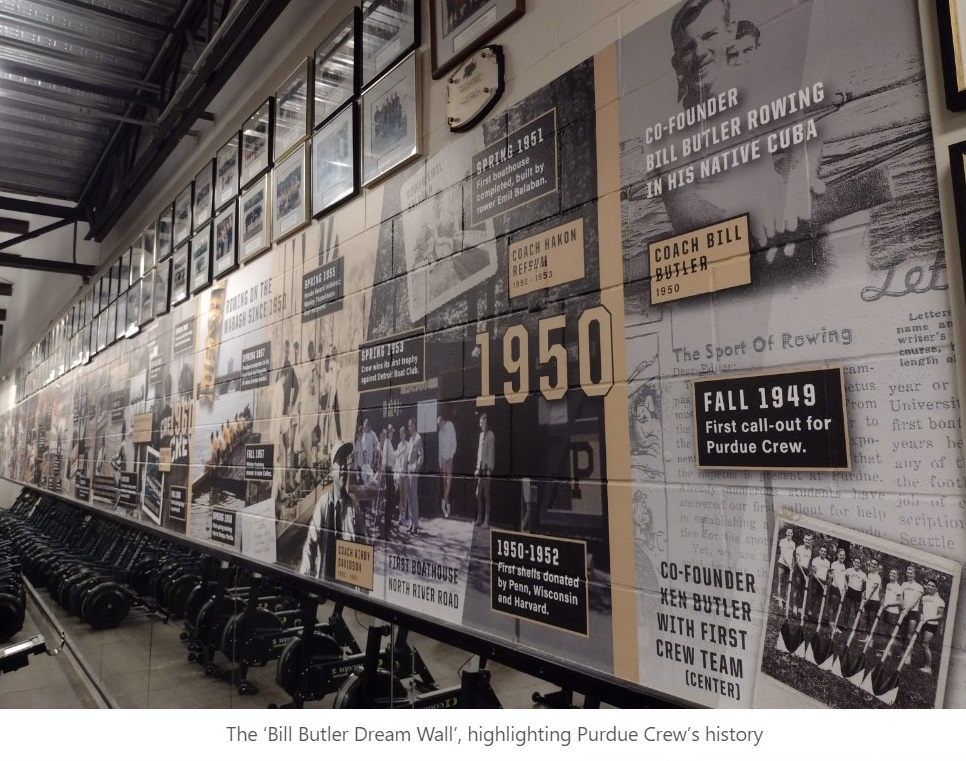 Celebration of the two full time professional coaches first hired by Purdue Recreation and Wellness through the advocacy of alumni. The list goes on, barely scratching the surface of the life and times of 73 years of rowers, coxswains, coaches, family, and friends coming together in fellowship to commit to something greater than themselves, greater than the sum of each individual part.

And know that this is only the beginning. As Lou Holtz, the venerable coach of a small regional Northern Indiana college football team once stated, “In this world you’re either growing or you’re dying, so get in motion and grow!” With Purdue Crew at an inflection point as we approach our Semisesquicentennial (75th) anniversary, the Purdue Rowing Association and I will be unveiling some new growth initiatives for the team and its alumni in the coming months. In brief, these initiatives will include alumni mentorship of current student-athletes, more alumni social and rowing events, greater alumni communication, historical record and archive expansion for inclusion in an interactive ‘Purdue Crew History’ exhibit to be featured next to Bill Butler’s Dream Wall, and an endowment fundraising initiative to ensure Purdue Crew’s financial stability in perpetuity- that the opportunities which we all had in college to row and grow as student-athletes on the Purdue Crew team will be available and expanded upon to the many whom will be walking in our footsteps in the years to come.

As for an update on the current team, it’s been a busy fall to say the least!

After the successful first week of recruitment, the frantic fall pace hasn’t settled down one bit. The team was Co-Chair of the Lafayette Hunger Hike, a 3k walk and celebration fundraiser to support hunger relief efforts by local non-profits locally, regionally, and globally. The team carried boats in Purdue’s Homecoming Parade. The team organized and competed in a costume and erg ‘Dash on the Bash’ race over Homecoming weekend, during which it also gave Boathouse tours to the many parents in town for the weekend. 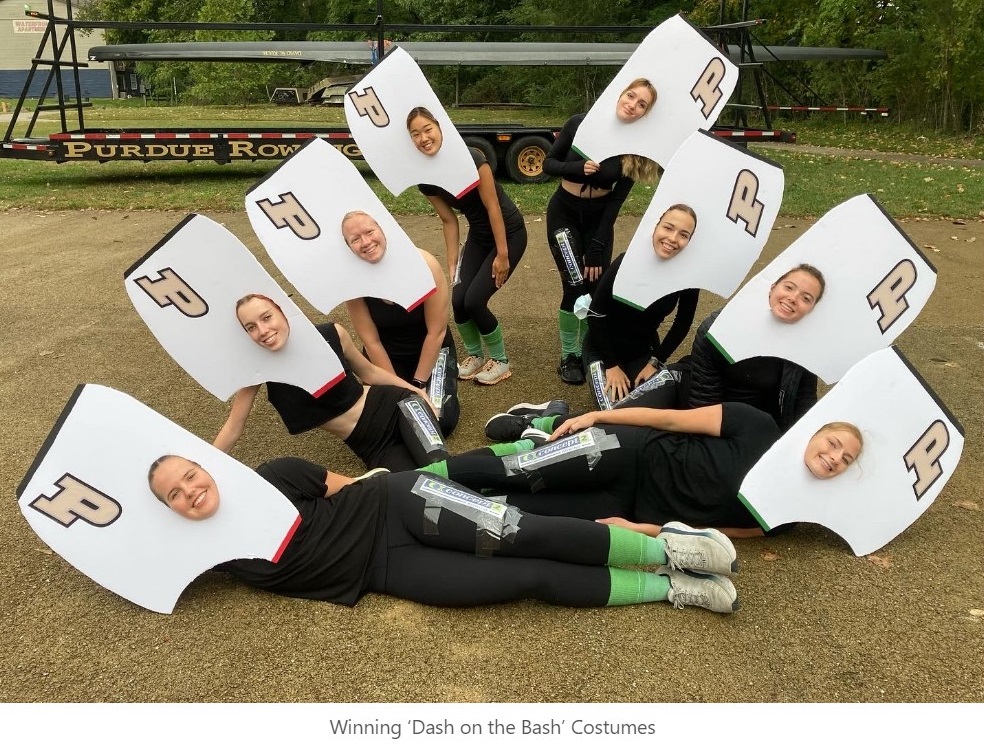 The team has also held its usual assortment of early season fundraisers to help offset some of the costs associated with being a member of the team, including both setup and cleanup of the Feast of the Hunters’ Moon, as well as the first three of Purdue Crew’s six fall Rent-A-Rower dates.

But the reason we train and why the athletes push themselves beyond what they thought they were capable of each day, is to race, to test their mettle against worthy opponents. I’m happy to announce that for the first time in almost two years, the team is back on the road and racing! The varsity team traveled with two charter busses up to Milwaukee on Saturday, September 18th for the Milwaukee River Challenge, a winding course beneath 18 bridges through the gorgeous downtown Milwaukee riverfront. It was a welcome site to see all of the different teams’ shell trailers lined up next to each other at the regatta, and hear the familiar shouts of “First Call!”, “Hands On!”, and Purdue Crew’s favorite sound of all, brought to us by our esteemed, venerated, and absolutely cherished Purdue Crew Parents Club, “Lunch is Ready!”. 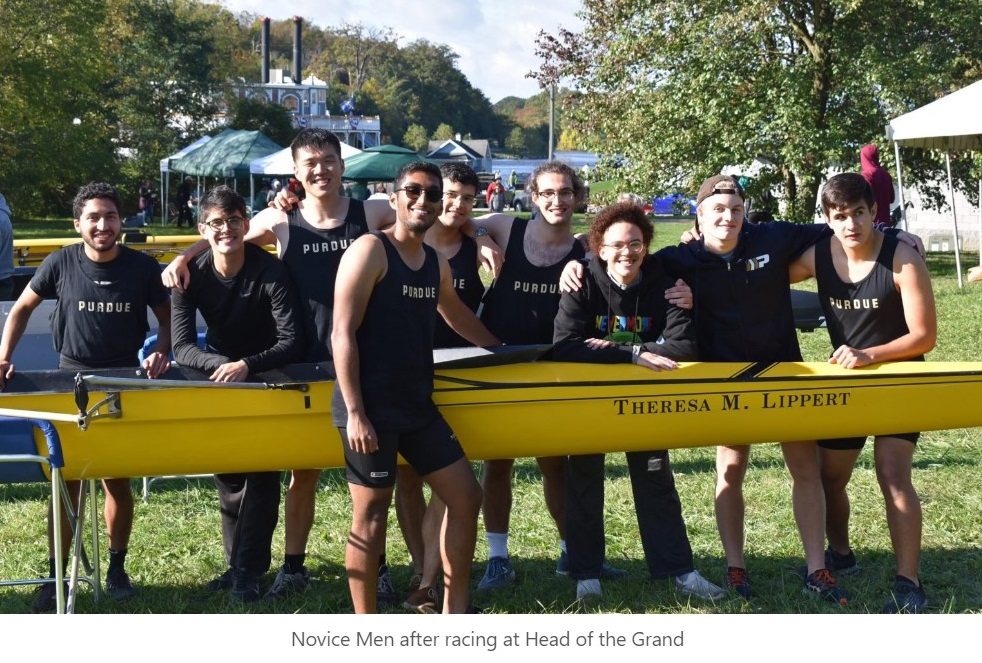 More recently, the team competed at the Head of the Grand regatta in Lansing, Michigan on Saturday, October 16th. This was an incredibly exciting occasion, as the team traveled with over 150 student-athletes in three charter busses, two shell trailers, and a parents’ club trailer, the largest Purdue Crew travel contingent in some time!

While the day got off to a bumpy start, with the charter busses getting stuck on the highway beforehand and then arriving an hour late to pick up the athletes (for a 3am pickup rather than the schedule 2am pickup), after a frantic trailer unloading, rigging, and launching of the first few race entries in Lansing, things settled into a familiar regatta rhythm.

The stunning blue sky, the delightfully crisp yet still warm fall air, the changing autumn leaves, and of course, the familiar shouts of “Lunch is Ready!” made the regatta a magical return to the most cherished parts of regatta weekends and we owe a big Thank You to all parents, friends, and alumni that were in attendance preparing food and cheering the team on. The team had a tremendous showing as illustrated by the results linked at the start of this paragraph, including wins in the Men’s V8, Men’s N8, Women’s N4, and medals in the Men’s V4 and Men’s N4. 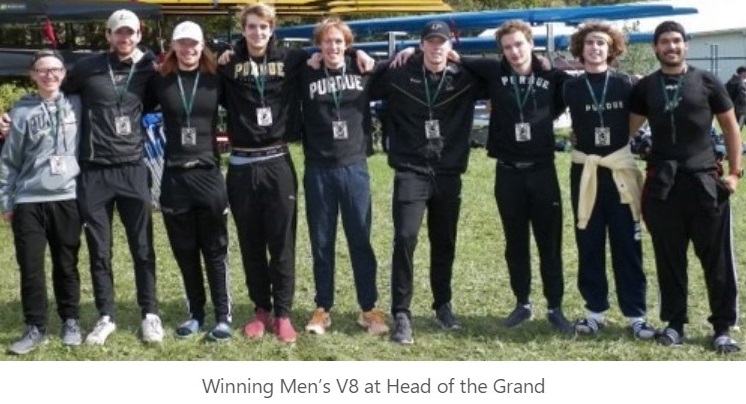 The women’s V8 had a notably good race, significantly closing the gap on fellow top club team Grand Valley from their Milwaukee race, and also putting in an impressive time against the V8 of scholarship athletes from Michigan State, and Eastern Michigan.

Looking ahead the team has one final regatta this fall, our largest of the season which we also host, the Bald Eagle Regatta at Eagle Creek Park in Indianapolis on Saturday, November 6th from 10am-2:30pm. This year’s event will see boats competing from the universities of Dayton, Grand Valley, Illinois, IUPUI, Michigan, Minnesota, Michigan State, Notre Dame, Virginia, and Wisconsin, among others, and we’d love to see you all out there cheering on our hardworking Boilermakers as they test themselves against top notch competition. If you’re interested in helping out with Parents Club or in assisting in some of the logistics of running the regatta, which the Purdue Crew coaches put on, please contact me via email.

While updates will be coming more regularly again as we get back into the swing of things, know that more regular updates and pictures can be seen on our many social media pages, including the Purdue Crew Instagram, Purdue Crew Facebook, and Purdue Rowing Association accounts.

So stay tuned. Cheer us on at a regatta. Stop by the boathouse. Get excited. Because while the first 73 years of Purdue Crew were awesomely awe inspiring, we’re just getting started…